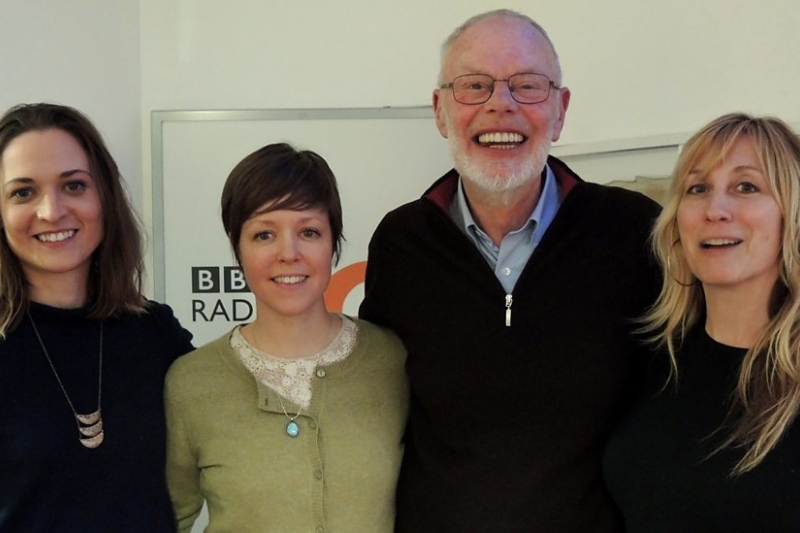 One of our all-time favourites Emily Barker returns in an Americana | Country | Folk supergroup also featuring Amber Rubarth and Amy Speace. Currently touring with Mary Chapin Carpenter, Applewood Road will be here to play songs from their eponymous album, which has received universal critical acclaim. The Sunday Times: "A flawless set that has to be the most haunting release of the past year.” The Daily Telegraph (5*): “There’s a moreish magic to the harmonies of this country-folk trio that recalls the vintage appeal of the Everlys and the Andrews Sisters.” The Daily Mirror (4*) “A joy from start to finish… fresh music from old roots.” The Daily Mail (4*): “Warm, rootsy Americana with potential mass appeal.” Q (4*): "A stunning country showcase of three gorgeous but markedly different voices.”

Emily Barker, Amber Rubarth and Amy Speace met for the first time in an East Nashville cafe in September 2014. Two hours later they had written the song they called “Applewood Road”.

They booked studio time at Nashville’s super cool analogue studio Welcome To 1979 and the following week recorded the song live to tape with just double bass as accompaniment.

The three were so excited by the song and the way that their voices blended together, they decided to expand the idea into a whole album. So, six months later, they reconvened in Nashville to write, rehearse and record twelve more songs with both the project and album called “Applewood Road”.

Back at Welcome To 1979, the songs were all recorded live to stereo tape with minimal accompaniment from some hugely talented session players - guitarist Aaron Lee Tasjan, Fats Kaplin on accordion, Telisha Williams on upright bass, Jabe Beyer on harmonica and drummer Josh Day.

The completed album was then handed over to the expert hands of Gearbox Records in London to be mastered at their vintage analogue studio, complete with their own 1967 Heaco Scully lathe, Westrex amplifiers and Studer tape machines.

Applewood Road made their performance debut in Nashville during AmericanaFest 2015. A visit to the UK followed with live shows including Union Chapel in London, a showcase at Tileyard Studios and album playback at Gearbox Records, as well as a live radio session for Dermot O'Leary's BBC Radio 2 show where they performed "Applewood Road" and REM's “Losing My Religion”.

The album “Applewood Road” will be released on 12th February 2016 as a 180gram vinyl album with free 24-bit 48kHz download. It will also be released as a compact disc and digital stream & download.

Emily, Amber and Amy will return to London for the launch of the album in early February and are available for interview. " Making our way down Applewood Road……."

EMILY BARKER
Emily Barker is the award-winning songwriter and performer of the theme to BBC TV’s Wallander. She has also provided the theme music to BBC drama The Shadow Line (which won an Ivor Novello for best TV soundtrack) and has recently composed music for Daniel Barber’s The Keeping Room as well as her first feature length soundtrack, for Jake Gavin’s UK road movie Hec McAdam starring Peter Mullan. Her music is a blend of roots influences from country to folk via 60s pop and her most recent release is a collection of solo versions of songs from her previous albums: The Toerag Sessions. Emily’s last critically acclaimed album with The Red Clay Halo, Dear River, garnered four and five star reviews in national and specialist publications alike and debuted in the UK Independent Album Breakers chart at #3, spending 5 weeks in the top 20.

‘Heartfelt songwriting… bridging the gap between folk, country and Fleetwood Mac’ The Times - ‘Emily Barker has a gift for great melodies’ The Guardian - ‘ambitious and beautifully wrought’ Q - ‘singer-songwriters are hardly an endangered species in 2013 but there should still be room for those as talented as Emily Barker’ Evening Standard

In addition to her solo work, Rubarth co-founded the Brooklyn based indie band The Paper Raincoat whose music has been featured widely on TV and films (Disney's The Last Song, One Tree Hill, Google and Aquafina commercials). Their debut album based on an original fictional story, is currently being expanded into a musical theatre production. Rubarth has also composed for films, including Sundance Film Festival winner Joan Rivers: A Piece of Work and the award-winning documentary Desert Runners. She is currently making her acting debut co-starring with Joe Purdy in a feature film set for 2016 release.

AMY SPEACE
Baltimore–born, Nashville-based Folk/Americana songwriter Speace has enjoyed rave reviews for her solo work, including latest album “That Kind Of Girl” and her 2013 record, “How To Sleep In A Stormy Boat,” a song cycle inspired by Shakespearean characters – fittingly for Speace since she started her creative career as an actress with The National Shakespeare Company in NYC before being discovered in a folk club by Judy Collins. Her debut “Songs For Bright Street” was released in 2006 on Collins’ Wildflower Records. “The Killer In Me” followed in 2009 with NPR comparing her to a young Lucinda Williams, then  “Land Like A Bird” on the Thirty Tigers label. Her track “The Weight of the World” was named #4 Folk Song of the Decade by NYC’s premiere AAA radio station WFUV.  Her songs have been recorded by Judy Collins, Red Molly, Memphis Hall of Fame blues artist Sid Selvidge and others. She has recorded duets with Ian “Mott The Hoople” Hunter, Gary Louris (The Jayhawks), Sid Selvidge, Soozie Tyrell (The E-Street Band), John Fullbright and John Moreland and has toured with Nanci Griffith, Guy Clark, Mary Gauthier, Ian Hunter, Judy Collins, Shawn Colvin, Alejandro Escovedo and many others.

“Amy Speace channels the classics” Billboard Magazine - “The next time someone tells you they don’t make good music anymore, tell them they must not have heard of Amy Speace. She is a timeless singer/songwriter”.  No Depression