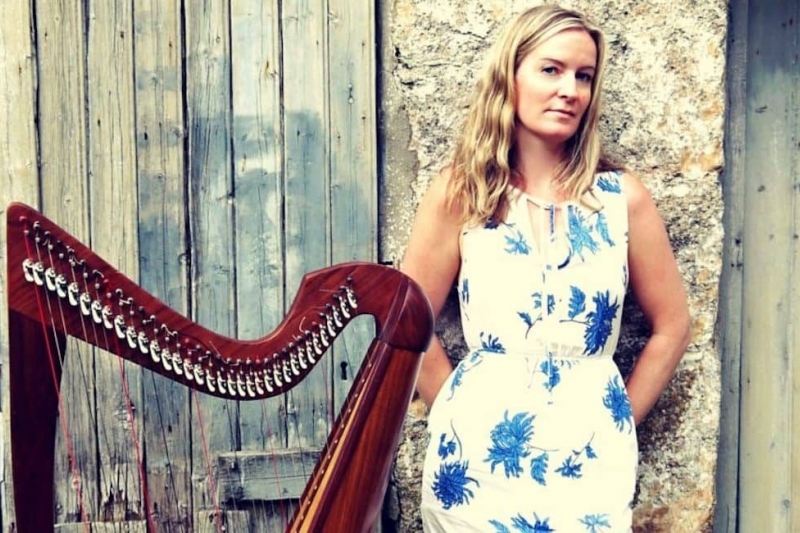 Lead singer and harpist for The London Lasses - widely regarded as the best female group in Irish music - McVittie is the missing link between Joanna Newsom, TalkTalk, Juana Molina and Portishead. She has just released her debut album We Are The Wildlife, a collection of folk pop fables and traditional ballads steeped in the majestic lore of her native County Down, to widespread critical acclaim...

Apart from her work with The London Lasses, McVittie is also a member of neo-impressionist outfit littlebow and currently collaborating on several other projects with Orla Wren, Keiron Phelan and Myles Cochran. Her composition You Are My Sister was released on Rural Colours on 30 May 2017 as part of a tribute to the late Pauline Oliveros. Her single Under the Pines (a double A side featuring Newry Mountain) premiered on FOLK RADIO UK on 19 June 2017 in the run up to the release of her debut solo LP.

As a full-time professional musician Brona is first and foremost a singer. As a trained biologist her self-penned songs are often imbued with elements of the natural world. Drawing her inspiration across a range of styles particularly folk, classical and electronic music, Brona enjoys experimenting with textures from different musical cultures. She has arranged music for many bands and singing groups, and has worked hard over the past few years to improve her production skills. In 2016 she produced 12 singles under the moniker Queen of Corkbots; her TOTM (Track of the Month) series.

Brona has spent many years performing her interpretations of traditional songs in various languages on the London circuit and has toured abroad in several bands and duos. In a variety of guises, she has graced the stages of numerous festivals including Glastonbury, Celtic Connections and Cambridge Folk Festival, and has produced music for theatre productions including a performance at London’s Royal Opera House. As founder of the Undercover Folk Club, London’s only themed open-mic – regularly Critics choice in Time Out – she pioneered the folk idiom as a platform for interpreting songs from different musical genres.

She has made music for radio and TV broadcast, and for short films. To date she has recorded six albums and six EPs with a number of talented musical associates.

Reviews to date include:

The Independent **** Irish harpist Brona McVittie’s debut release as a solo artist was largely inspired by her return, after years in London, to the rural environs of her native County Down. Which must be a place of surpassing beauty, judging by the gorgeous We Are The Wildlife. On songs old and new, her silken vocals and twinkling harp are deftly augmented by subtle instrumental tints and washes, like the glistening brass tones pulsing softly through the title track, and the glints of steel guitar and wafts of cello carrying her resonant harmonies in “And The Glamour Fell On Her”. The tone is set by “When The Angels Wake You”, a twittering duet of harp and birdsong cushioned in a gentle ambient drone as McVittie’s spirit soars aloft with sun, sky and stars. Elsewhere, breathy flute casts pastoral spells over several tracks, and quietly puttering percussion drives others, while the most subtly daring moment comes when her jaunt “Under The Pines” is bookended by quietly bubbling synth tones. A rare, and rarefied, beauty.

The Guardian **** Electronic music, used judiciously, can serve the folk song well, particularly when it’s teasing out subtler textures in the tradition, noticing the smaller stitches in its seams. This is certainly true of the work of Brona McVittie, an Irish singer and harpist who cites Tunng and French experimental artist Colleen among her inspirations. She has recently returned to her native County Down after years living in London, and this album features her own promising originals alongside Irish folk songs that she embroiders beautifully. The Flower of Magherally’s harmonising flutes recall Virginia Astley’s pure pastoral instrumentals, while The Jug of Punch feeds an A.L. Lloyd drinking song through an ambient drama that summons up the spirits of both Talk Talk and the Unthanks (amazingly, this works). Every note of sweetness to McVittie’s voice has a bite behind it too, showing you the stuff under the skin. A stimulating debut.

UNCUT 8/10 A beguiling hint of Brigid Mae Power in the voice, a felicitous echo of Joanna Newsom in the harp playing and a bold experimentalism in common with both characterises the debut solo album by Irish singer McVittie. Recently returned to her native County Down after a long sojourn in London leading various folk ensembles, We Are The Wildlife is steeped in dreamy Irish pastoralism but tinted with post-folk electronica influences that range from Beth Gibbons to Tunng. The ghostly “Under The Pines” is testament to her songwriting skills, while Newry Mountain is a smartly contemporary reinvention of a traditional ballad. Simply gorgeous.