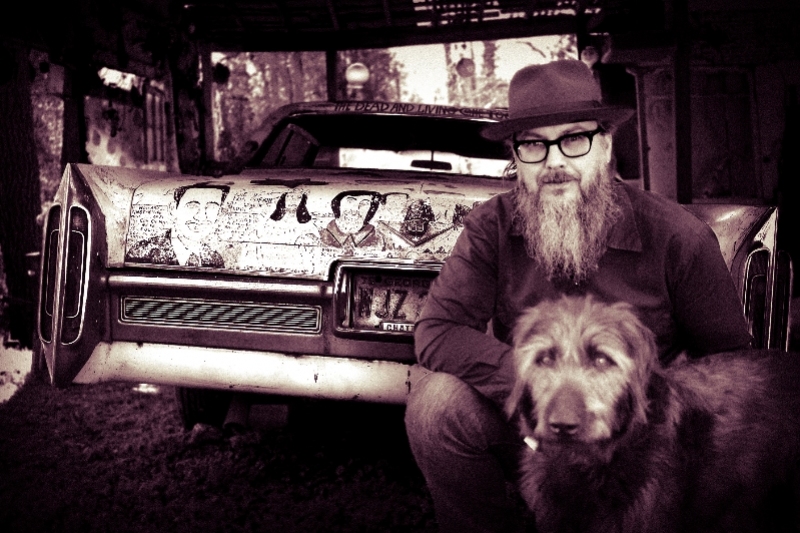 Tonight, for one night only, we’re relocating to the Yorkshire Dales village of Reeth where we’ll welcome at the Memorial Hall the great U.S. Alt-country | Folk singer-songwriter OTIS GIBBS, BBC Radio 2 Folk Awards nominee ROSEANNE REID and English Folk gem VANESSA WILLIAMSON in celebration of our 20th anniversary. Don’t come to Farndale for this one! Set your satnav for the heart of the northern dales – postcode DL11 6QT.

Raised in Wanamaker, Indiana, Otis Gibbs sings of social justice (or lack of it) in a powerfully intimate blue-collar style reminiscent of WOODY GUTHRIE and PETE SEEGER. His sharp lyrics and raspy vocals remind us of STEVE EARLE, TOWNES VAN ZANDT and GUY CLARK. But he’s also been likened to TOM WAITS, BRUCE SPRINGSTEEN…and hell, yes, even BOB DYLAN.

We’re going to Reeth for this one because this gorgeous Dales village 50 miles west of Farndale is in our DNA. Not just because it’s on exactly the same line of latitude as Farndale, and also on Alfred Wainwright's Coast to Coast Walk – but because it was there, in 1995, we had the idea for The Band Room.

You don’t need an excuse to go to Reeth but we’d gone there on this occasion having heard there was a useful Cajun band, the French Alligators, playing the Memorial Hall. We put on our dancing shoes, hit the road and two-stepped the night away...And we had such a gas, the next day back in Farndale we scratched our heads and asked ourselves: “Why can’t we do that here?"

I knew the Band Room had potential because I’d organised a gig there some thirteen years earlier in 1982. I worked as a music journalist in the late seventies and early 80s - the golden age of Punk Rock and New Wave - writing for Sounds, NME, Time Out, and others, and had ended up trying to counter the London centric bias of the music industry by making LP compilations of new bands from the north of England.

The first of these, Hicks From the Sticks, soared to the top of the independent charts after John Peel played the album in its entirety over four nights on his Radio 1 show - and it stayed there for several months, selling a staggering 15,000 copies. Among the musicians it introduced were Pete Burns’ Nightmares In Wax, Pete Wylie’s Wah! Heat, Section 25 (a Factory band with connections to Joy Divison and New Order), future members of the Sisters of Mercy, and post-punk industrial Sheffielders Clock DVA, who had links to Cabaret Voltaire and Heaven 17.

Two years later my third LP, Your Secret’s Safe With Us, featured the first recorded work by Jarvis Cocker’s Pulp, along with tracks by The Chameleons, Stockton's multi-talented Makaton Chat and many other cult northern indie, electro and synth-pop bands. One of my favourite songs was World in Action by The Vets, a vibrant, witty and very sharp outfit much beloved of John Peel, from Hornsea, East Yorkshire. When someone came up with the idea of putting on a celebratory gig at The Band Room, it was they who came out on a freezing cold night during the winter of 1982-3 to show how – 30 years after Farndale’s Silver Band had finally called it a day – it was still possible to blow the roof off of the place. Strangely, in retrospect, after The Vets unplugged their amps that night everyone went their separate ways, and that was that. There was no plan to do it again. Until the day, 13 years later, we went to Reeth...

We’d like to thank all the great acts who’ve played The Band Room these last 20 years. Stars like Cerys Matthews, The Handsome Family, Howe Gelb, Waterson: Carthy, Willy Mason, Allison Moorer, Richmond Fontaine, Laura Viers, Mary Gauthier, Peter Rowan & Kate Rusby. And we’d like to thank every single fan who’s been out to Farndale to see them. We couldn’t have done any of it without you.

One of Otis Gibbs’ biggest fans, BILLY BRAGG, named Gibbs' song ‘The Peoples Day’ in his list of ‘Top Five Songs with Something to Say’, published in the Wall Street Journal.

Andy Gill of the The Independent wrote: "There's an authenticity and dedication in Gibbs' delivery which is somehow cleansing in its purity.”

Rolling Stone recalls: “This Nashville singer-songwriter spent his formative years performing in a bar for his drunk uncle's buddies before working as a nurseryman planting trees for eight years. With a low tolerance for bullshit and a guiding principle of maintaining his artistic integrity no matter what, Gibbs' song writing is deeply personal and profound, like a coarse cross of Bruce Springsteen and Guy Clark. Remaining obscure has unintentionally earned him a loyal cult following throughout Europe and parts of the U.S. but after hearing his acclaimed album Souvenirs of a Misspent Youth, it's plain to see Otis Gibbs is a man you should give a damn about.”

...While iTunes opines: "Utterly unique, yet clearly in a delightfully stubborn American line of literate, politically and socially conscious folk artists, Gibbs deserves a much wider audience for his clear, simple, and cleverly crafted blue-collar songs.”