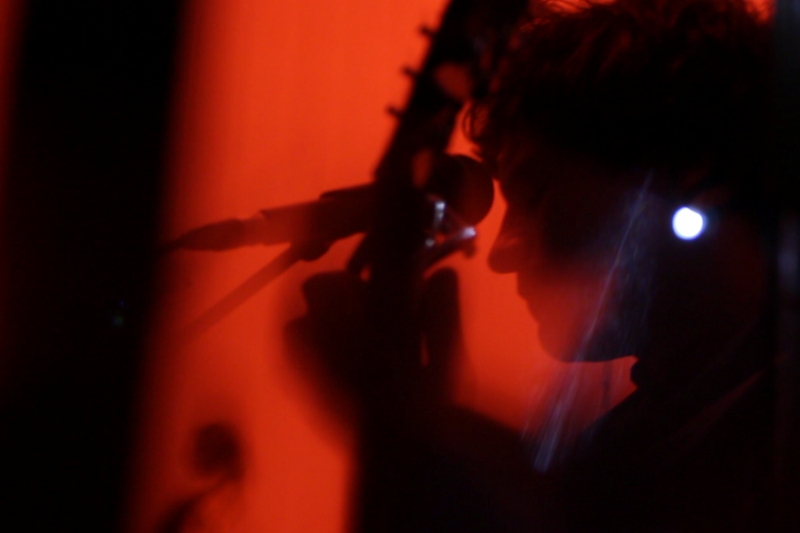 Exclusive intimate show by US guitar phenomenon Ryley Walker, who completes an early hat-trick of appearances at the magical North York Moors venue described by The Handsome Family as ‘the greatest small venue on earth’ and by Cajun legend Marc Savoy as “my favourite venue anywhere in the world.”

Walker returns to The Band Room (w/ band) on August Bank Holiday Sunday - the night before the unmissable 110th Farndale Show - having already played two mesmerising sets at TBR in August 2015 and February 2016.

We're thrilled to have him back at the peak of his powers.  “The guy's on fire at the moment,” said one London critic. “His psychedelic indie-folk jazz-funk fusion is off the scale, talent-wise. He’s the new Guvnor.”

Still only 27, singer-songwriter Walker is already on target to become a major figure in contemporary music. His second album Primrose Green received widespread critical acclaim, Bert Jansch, Tim Buckley, Nick Drake and John Martyn among the illuminati who inspired his first transcendental masterpiece.  His third album, Golden Sings That Have Been Sung (Dead Oceans), has similarly blown away fans and critics alike.

“Shiver-inducing musical intensity… The jazz-math-folk troubadour of the moment.” The Observer – 4 Stars ****

“Profound, funny, intricate… On Golden Sings Walker has found a way to fold his rambunctious personality into the warp and weft of the songs without ever detracting from their integral beauty. It’s a document of how his character and music are evolving in raw and nuanced ways, in directions which are rewardingly creative.” UNCUT 9/10 (Album Of The Month)

The story of Golden Sings That Have Been Sung…  In November 2015, at the end of a ten month period which saw him play over 200 shows, Ryley Walker decided that he should probably head home. However you wished to measure it, he was surely due some sort of holiday. The preceding months had been extraordinary. In March, his second album Primrose Green, emerged to critical hosannas from the likes of Uncut, Q, Mojo and The Guardian – in the process, earning admiration of musicians who had chalked up no shortage of turntable miles in Walker’s life. Robert Plant declared himself a fan – as did double-bass legend Danny Thompson, with whom Ryley would later embark on a British tour. For all of that, a holiday was the last thing on Ryley’s mind – and certainly not a holiday in his adopted hometown. After a year spent on the road, all that Ryley could associate with Chicago was the emotional debris he had left behind.

Indeed, anyone who caught his performances throughout the course of 2015, will attest to Ryley’s apparently effortless facility to conjure a breath-taking spectacle from a standing start. By the time of his 26th birthday last summer though, it became increasingly clear to Ryley that his recorded work was becoming less and less representative of the directions he and his close-knit group of musicians were taking in the live shows. Word of mouth and critical acclaim ensured sell-out audiences at his British shows, whilst a sprawling tour of the USA around Primrose Green presented a perfect chance to workshop ideas for what would eventually become his third studio album, Golden Sings That Have Been Sung. Last May, before an audience of “about four people” in Cleveland Ohio, Ryley remembers springing a new riff upon long-time guitar foil Brian Sulpizio, over which he found himself singing the line, “I only have a Christian education.” Over a period of successive nights, this riff, attached to a single lyrical fragment, broadened out into what would become one of the signature songs on the next record – with Ryley as much a fascinated witness to its creation as those who saw it taking shape. Of “Sullen Mind”, the song which grew out of those improvisations, Ryley explains, “I felt like I wasn’t raised to have to deal with negative, dark things in my life, but the reality is that I do. Everyone does. And a Christian education isn’t likely to save you from that.”

Over the ensuing months, Ryley’s increasing desire to push himself beyond the strictures of songs he had already recorded, increased his hunger for concocting new material before ever increasing audiences. In September, over 1500 people turned up to watch Ryley and his band at Amsterdam’s legendary Paradiso club. “I didn’t really have any lyrics at that point. All I had was ‘You could find me at the Roundabout’. I was thinking about a bar just outside of Appleton, Wisconsin, called The Roundabout, that I’d sometimes go to with my parents.” What is ostensibly a song about “any of those bars in the mid-West where the beer is $2 for a giant glass of beer, and they’ve got chicken fingers and fries for $5” opens a portal into Ryley’s own blue-collar psychogeography, with inspired gambolling double bass from Anton Hatwich to help propel us there.

If “The Roundabout” represented a symbolic return to Chicago, other songs were directly wedded to Ryley’s actual return there. Some of his formative musical memories had been shaped by the work of pioneering Chicago acts such as Gastr del Sol and Tortoise. “Jeff Parker was the guitarist with Tortoise, and I used to listen to him a lot,” recalls Ryley, who figured that, for the first time in his career, it might be helpful to enlist the services of a producer. With only one person on his shortlist, once again, all roads led back to Chicago. Ryley had been a long-time admirer of sometime Wilco multi-instrumentalist LeRoy Bach. Back in 2009, still in his teens, he had frequented the improv nights hosted by Bach at a restaurant/gallery space called Whistler. “For me, it was an incredible opportunity,” recalls Ryley, “…because you would sometimes also have Dan Bitney, the drummer with Tortoise, and I’d get to play with these people. I mean, they were twice my age. I’m sure they thought I was annoying at first, maybe some of them still do, but I kind of looked at them like gurus – and to have these old school Chicago heads taking me in was just amazing.”

For Ryley then, the prospect of having Bach produce his album was something of a no-brainer. “It was everything I wanted it to be,” he enthuses. “I would go to LeRoy’s house every other day with a riff, and we would take it from there.” Perhaps more than any other song on the record, the somnambulant sun-dappled intimacies of opening track “The Halfwit In Me” most audibly bear the imprint of those Whistler sessions. “Absolutely,” concurs Ryley, “I have to give LeRoy a hand for that. He helped shape that song, especially the clarinet parts. We went into the studio over the Christmas vacation – in fact, I think we actually recorded that song on Christmas Day.” Here and elsewhere, it’s impossible to miss the concerted lyrical shift away from the rapt generalities of Primrose Green and into avowedly personal territory.  “Funny Thing She Said” is a case in point – an unflinching study of separation set to a shimmeringly supple ensemble performance, at times calling to mind David Sylvian’s late 80s solo albums or the humid euphoria of Iron & Wine’s best work.

Perhaps the most exciting moment of these recordings though, came right at the very end, when he and LeRoy Bach assembled them in a line and began to realise the distance they had covered together. “It isn’t always obvious to you, when you’re in the thick of it,” he explains. “But, for the first time, I thought we had something that corresponds to what I was hearing in my head.” No less exciting for Ryley, and for those of us who have followed his path with increasing enthusiasm, are the new possibilities mapped out by these songs: the soft, slo-mo explosions of melody on “A Choir Apart” that intermittently burst through the distant thunder of the verses; the intriguing surreal images meted out by “I Will Ask You Twice”, like a malfunctioning slide projector; and, perhaps best of all, the stunning finale, “Age Old Tale”, which spiders out from an Alice Coltrane-inspired reverie into a sustained rapture that very few artists beyond perhaps Talk Talk on Laughing Stock, have managed to achieve. This is music made for the dewy magic hour when night and day have yet to meet and, as long as the song is playing, you feel might briefly leave the corporeal world with them. This is the music you might imagine the woodland animals making once the humans have left for the night. This is Ryley Walker’s coming of age.