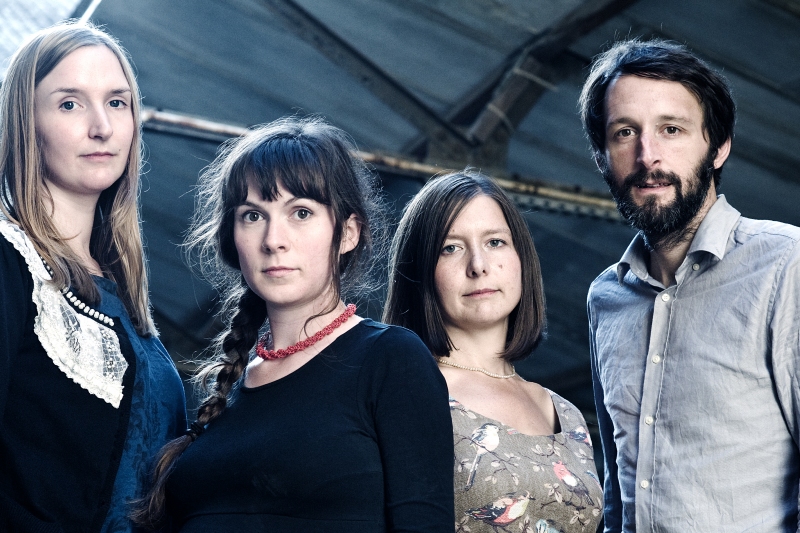 On offer tonight we have 5 gigs for the price of 1 in that the individual members of Anglo-Scottish Folk Supergroup The Furrow Collective - Rachel Newton, Lucy Farrell, Emily Portman and Alasdair Roberts - are each going to play a short solo set before returning to the stage together as the headline act.

Described by MOJO as 'a mouth-watering collaboration' and ‘a masterclass in folk tradition’ by The Observer, The Furrow Collective is four fine soloists sharing a mutual love of traditional songs, from both sides of the English and Scottish borders, and backing it up with exquisitely-inventive, boundary-defying musicianship.

The Furrows’ second album ‘Wild Hog’ was released in November on Hudson Records to widespread critical acclaim.  Produced, like its predecessor At Our Next Meeting, by Andy Bell, it reveals a quantum leap in the group's sound and style, and also features brilliant guest contributions by Alex Neilson (Trembling Bells) on drums and Stevie Jones (Sound of Yell) on double bass. It reminds us of the dark, quirky, exotic songs of 2 all-time Band Room favourites: The Handsome Family and Michael Hurley.

The critics were blown away:

“Back in the day they’d have been called a supergroup, but Alasdair Roberts, Lucy Farrell, Rachel Newton and Emily Portman have shrewdly commandeered the term ‘collective’. Unlike many such collaborations, they actually sound like a genuine meeting of minds who knit neatly into a natural, albeit oddball, unit. Kindred spirits all, they are not merely drawn to the weirdness of traditional song, but are inspired to waft ever-more dreamlike and bewitching spells around it. Brilliantly produced by Andy Bell with Trembling Bells percussionist Alex Neilson among the guests, they gently place their own quietly deranged mark on some of the tradition’s more bizarre epics, from swan murder (Polly Vaughn) to sex, ghosts and defilement (Willie’s Fatal Visit) and rape, defiance and childbirth (Prince Heathen). They even make Barbara Allen sound fresh and ever more tragic. Intriguingly engrossing, insidiously disquieting.” (4 Stars MOJO)

“Each member of this quartet boasts their own place in the British folk scene, but is the group more than the sum of its parts? This second album gives a more convincing affirmation than their 2014 debut, with fine vocal harmonies and deft instrumental interplay testifying to intense teamwork between Alasdair Roberts, Emily Portman, Lucy Farrell and Rachel Newton. They take turns to lead on a selection of antique balladry that veers between the jolly (an Appalachian-style title track) and the doom-struck (a neo-rock version of Willie’s Fatal Visit). Banjo, electric guitar, harp and fiddle combine variously, nowhere better than on the rueful Many’s the Night’s Rest. A winningly produced masterclass in folk tradition. (The Observer)

“Much of the best recent British folk music has come from groups of musicians already well known for their solo work and involvement in other projects, and the Furrow Collective fall firmly into this category. Alasdair Roberts, Emily Portman, Lucy Farrell and Rachel Newton got together to re-work traditional songs, and the second Collective album shows they have developed a compelling style and sound of their own. There are no unaccompanied songs this time, and they have added bass and drums, courtesy of the gently inventive Alex Neilson. They start with Roberts’ cheerful, banjo-backed Wild Hog in the Woods, then ease into the kind of songs full of death, magic or gloom in which they specialise. From Portman’s harp and fiddle-backed Barbara Allen to Farrell’s thrilling but gruesome Willie’s Fatal Visit, and the exquisite harmony work on Many’s the Night’s Rest, it’s a fresh, gently powerful set.” (The Guardian)

‘The Furrow Collective have an air of immeasurable antiquity, while at the same time making the songs vibrantly new’. (R2 Magazine)

Nominated ‘Best Traditional Track’ for The Unquiet Grave; Emily Portman nominated for ‘Folk Singer Of The Year’ at the BBC Radio 2 Folk Awards 2016.