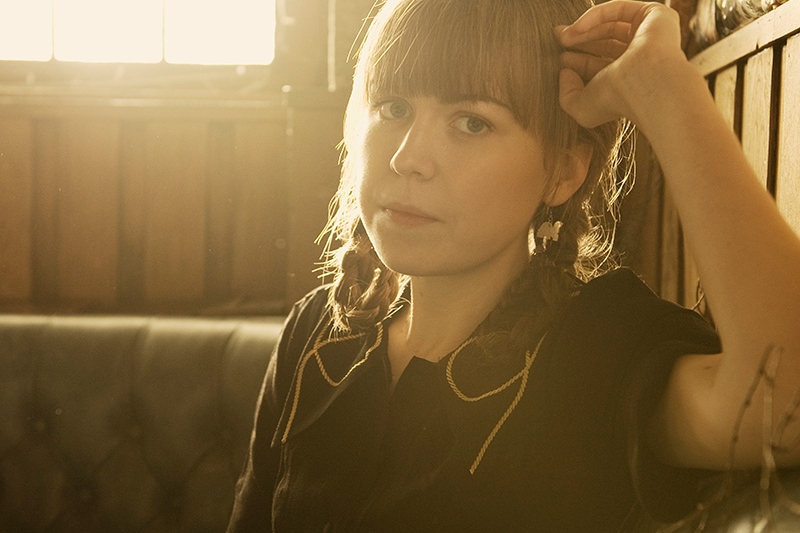 A dream double bill if ever there was one...Psychedelic folkster Alessi's Ark (aka Alessi Laurent-Marke) is touring this year with LAURA MARLING and is every bit in the same class, having already made her mark with her stunning debut album Notes From The Treehouse (with help from BRIGHT EYES' Mike Mogis and Nate Walcott) and toured with CERYS MATTHEWS, MARIEE SIOUX and EMILIANA TORRINI. While you could easily file Alessi's cosmic madrigals alongside BAT FOR LASHES, JOANNA NEWSOM, BJORK and SYD BARRETT (really) in contrast, the hauntingly beautiful experimental folk of Rachael Dadd reminds us of SANDY DENNY singing MIDLAKE, ESPERS and THE DECEMBERISTS. In the time of THOMAS HARDY...

Please note Rachael will also be introducing - all the way from Bristol and Tokyo - her associated bands THE HAND and ICHI from whom you can expect an extraordinary World | Folk fusion featuring banjo, kora, steel-pan, glockenspiel, accordion and trumpet.... More on The Hand and Ichi here (pdf)

On the day before her 17th birthday Alessi Laurent-Marke signed her first record deal. Asked who her dream producer would be for her debut LP, Alessi said Mike Mogis of Bright Eyes. Less than 6 months later she was travelling to Nebraska to record the album at Mogis' and CONOR OBERST'S studio in Omaha.

The album, Notes From The Treehouse, was released in May 2009, featuring full band versions of some of the songs from her Bedroom Bound EP, as well as newer compositions such as The Dog and Hummingbird. The album also featured many musicians that had initially inspired her to begin making music including Jake Bellows of Neva Dinova and Nate Walcott of Bright Eyes.

Since the album Alessi's Ark has played shows around the UK and in Europe with the likes of Sons of Noel and Adrian, Mariee Sioux, Emiliana Torrini and Cerys Matthews, and this spring will release her new EP ' Soul Proprietor on Bella Union...

There are so many rave reviews of Alessi out there to Google but we think this Guardian Band of the Day piece published in 2008 covers a useful expanse of ground... "18-year-old folk-popster ALESSI'S ARK spins cosmic madrigals with suitable fairytale melodies, dream imagery and baroque arrangements."

Alessi Laurent-Marke is an 18-year-old Londoner whose often sparse acoustic lullabies put her more in the next-Laura-Marling category, but when she and her compadres lay on the strings her songs do assume a poppy lushness that is quite captivating. Her song, Constellations, for example, is a picture of rapture made all the more magical by the generous use of harp and violins (it's actually about freckles). Then again, if you're into the raw and the powerful, the stripped-down visceral and impactful, Laurent-Marke's breathy vocals, tendency towards the ornate and general air of whimsicality are about as far removed from, say, Florence & the Machine as you can possibly get.

A couple of musicians from Omaha in Nebraska who comprise two-thirds of cult American indie heroes Bright Eyes - namely, Mike Mogis and Nate Walcott; that is, the ones who aren't Conor Oberst - provide the backing on her debut album Notes From The Treehouse. This ranges, as we say, from the simple and spare to the sweeping and symphonic.

Whimsy and wonder are the watchwords, so beware. Fans of the gutsy and earthy should look away now. Laurent-Marke has been writing material like The Asteroids Collide - "about," she explains, "a long-distance love affair, using the metaphor of asteroids as bodies" - since she was 15. She's got songs called Magic Weather complete with suitable fairytale melodies, dream imagery and baroque arrangements. And she writes on her MySpace of her recording-artist counterpart Alessi as "a magical creature... I think of her as this unique 18-year-old girl who is very excited, very alert, and very open to the world of imagination".

She's not all cutesy doe-eyed Disney-esque innocence. She's not from Wookie Hole or Nether Wallop or somesuch rural idyll full of fairies and elves, she's from Hammersmith. Much of her inspiration, she says, comes from authors like JD Salinger and Edward Gorey (even his name sounds, you know, a bit horrific) and films such as Harold and Maude, a comical but disturbing tale of a love affair between an old lady and a boy. She created her own fanzine, Brain Bulletin, when she was at secondary school, and proceeded to distribute it in a launderette on Shepherd's Bush Road. And she describes what she does as "a new take on psychedelic folk music, very British, a little like Syd Barrett, who was very childlike in his own way".

"Barrett had pretty much lost his mind and reverted to a state that was, yes, almost childlike in its defection from reality by the time he'd left his teens. We trust Laurent-Marke knows what she's playing with here."