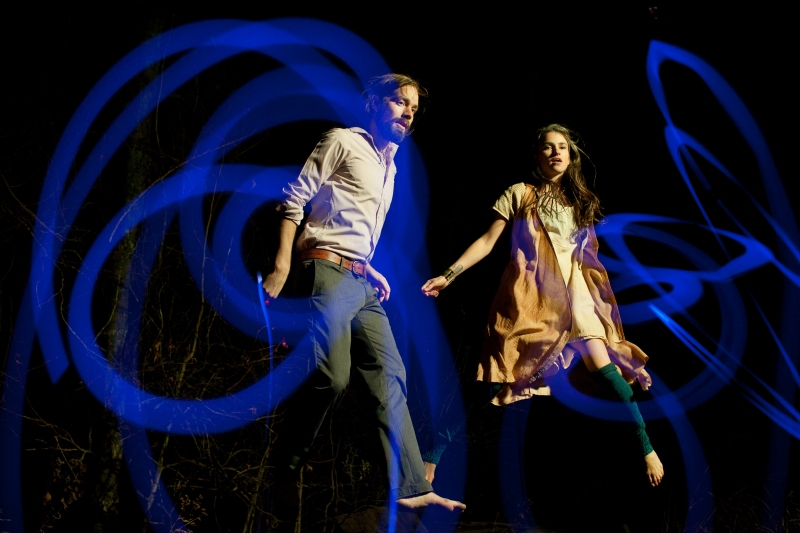 Bowerbirds sit on the dividing line between the freak folk contingent led by Devendra Banhart and Joanna Newsom and the more straightforward sunshine pop of Lavendar Diamond: for all the self-conscious quirkiness of their lineup and instrumentation, there's an unfeigned positivity to their music that's refreshingly direct. The roots of the Bowerbirds lie in the Raleigh, NC, indie rock trio Ticonderoga, who were led by singer and guitarist Phil Moore. During the recording of the trio's second album, 2005's The Heilig Levine LP, Moore took a job tracking birds for the North Carolina Museum of Natural Sciences, which involved living in a cabin in the Carolina woods, far from civilization. Moore's girlfriend, a visual artist named Beth Tacular joined him in the cabin to work on her painting; at night, Moore began writing songs influenced by the couple's rustic, natural surroundings. When Ticonderoga split up on tour supporting their second album, Moore and Tacular started their own band, Bowerbirds, with Tacular teaching herself how to play the accordion and acquiring a marching band-style bass drum to keep rudimentary time. In this stripped-down incarnation, Bowerbirds recorded a six-song EP, Danger at Sea, in 2006. Drafting producer and multi-instrumentalist Mark Paulson to flesh out the duo's sound, the Bowerbirds released their debut full-length, Hymns for a Dark Horse, on the new indie label Burly Time Records in 2007.

What the critics say about Bowerbirds Hymns for a Dark Horse...

"Bowerbirds' Phil Moore and Beth Tacular live together in an Airstream trailer in the North Carolina woods, and their debut album sounds exactly like the product of such an environment. Brimming with nature imagery and rendered in simple, acoustic instrumentation, the CD has a relentlessly organic vibe that supports its main thesis: Nature is good, civilization is bad. On the tremendous track "In Our Talons," Moore sings, "You may not believe this, but even we were scared at first, It takes a lot of nerve to destroy this wondrous earth."

Bowerbirds' lyrical themes are overrun with idealism, but the sometimes trio-their friend Mark Paulson often joins them-creates the right kind of sonic haven to cradle its hippied-out thoughts. On Hymns for a Dark Horse, they weave gentle guitar, accordion and violin around wistful words, drawing on a unique blend of folk traditions. An old-time jazz tone pervades "Bur Oak," while the title track shows a hint of Latin clave. Much of the album has an Appalachian-stomp feeling, heightened by the band's stripped-down percussion setup. Bowerbirds make their beats with only a bass drum and a homemade high-pitched whacking. Judging from their outdoorsy poetry, this defining sound could be nothing more than a stick hitting a tree."
(Time Out New York)

"8.4 out of 10... Bowerbirds churn out deceptively pleasing folksongs about plants and animals and the unforgivable things we do to them... hypnotically pretty and a little bit weird, characteristics of the very best kind of Americana music. Bowerbirds do for backyards what the Hold Steady's done for parking lots - translated place into sound."
(Pitchfork)

"Only once every ten years or so does one hear a new band this good, this bursting with ideas, this audibly in love with music... It is beyond stunning. This band is the complete package."  (John Darnielle, of the Mountain Goats)

"9 out of 10...This record is beautiful, timeless, and should not go unheard." (Venus Magazine)

"Bowerbirds' songs don't necessarily end: they wither beautifully until all the blood is spent, every chorus dotted in red... When Phil Moore and Beth Tacular and Mark Pailson write songs, they write love songs. And when they sing, they sing with love too."
(Stylus Magazine)

"...the latest lo-fi band we've been fancying: Bowerbirds. We're sure their bonfire tunes will melt you before the tour wraps up."
(Paste Magazine)

"This Raleigh trio reaches beyond the humble instrumentation of nylon-stringed guitar, accordion, violin and bare-bones percussion to create deceptively intricate and alluring arrangements. It's certainly rustic, but the band's roots are as much Left Bank, chamber folk and even cabaret as they are back porch."
(Harp Magazine)

What the critics say of  Bowerbirds' live show:
"Bowerbirds' music comes off as even more organic live, even more ebbing and flowing like the seascapes the band sometimes sings about..."
(Review of Troubadour, Los Angeles, show in Prefix Magazine)

"But the big winner of the showcase to these eyes and ears were Bowerbirds. Been waiting a long time to see them now, and the North Carolina trio exceeded expectations. It was a simple stroll through their outstanding Hymns For A Dark Horse, singer/guitarist Phil Moore usually starting tunes alone, rolling out his Darnielle-approved lyricism to a loping cadence, then to be joined by partner Beth Tacular (on accordian/bass drum/harmonies) and wine expert Mark Paulson (on violin/bass drum/harmonies)."
Stereogum

"Bowerbirds, from Raleigh, North Carolina, come out of the same nature-worshipping circles as the Microphones, and are similarly understated: Undersung male-female harmonies, accordion and plucky acoustic guitar, brushed drums, and the occasional violin."
(Pitchfork)

"With the interesting instrumentation, plaintive male-female vocal harmonies and varying arrangements, Moore's songs took on a rambling dimension that would be just as at home in an Eastern European gypsy encampment as they'd be on some rogue, restless pirate ship. These North Carolina pop darlings soar with quirkiness and plenty of pluck."
(Spin Magazine)

"Bowerbirds opened the show last night with their enchantingly delicate musical poetry. Having already listened to their songs a fair amount I knew to expect beauty and high quality songwriting; however, I wasn't ready for how perfect their vocals came across in person."
(Ear Farm)