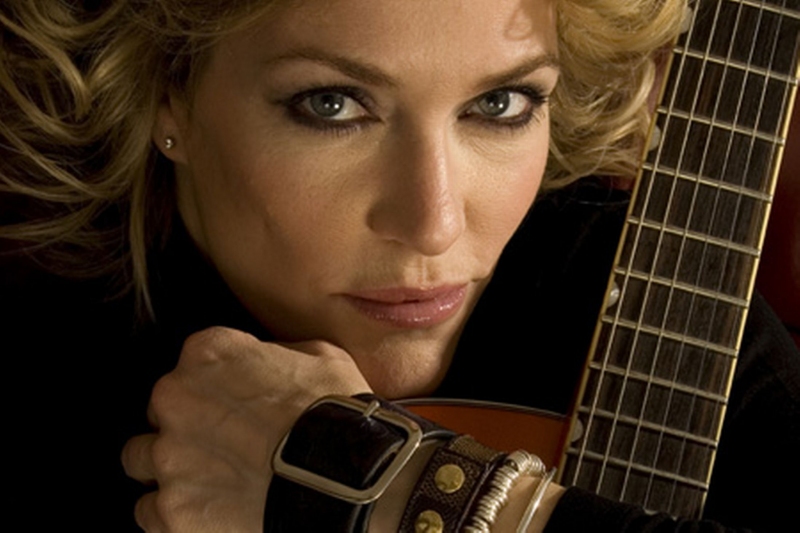 The Band Room emanates the most unpredictable magic. For Cerys Matthews, once the erratic pop queen of Catatonia now blossoming anew in rural Nashville motherhood, Saturday was the start of her autumn tour.

It was a warm-up not mentioned on her website, but a magnet to the first surprise of the night: her very vocal pack of Sapphic supporters. Cerys, meanwhile, had parked up in a 12-seater tour bus bigger than the wooden hall. We waited outside, snaking down the hill as she went through an extensive soundcheck where that unmistakeable Cardiff birdsong travelled on the night air towards Kirkbymoorside.

Support act Alun Tan Lan sang entirely in Welsh - disappointingly the Welsh word for bicycle turned out to be bike - and when Cerys's American band emerged into the twinkling fairylights they had the look of hick farmboys unlikely to sleep before the morning milking session.

Cerys tucked her hair beneath a Sixties' peaked cap and sipped on the sweet Yorkshire nectar of a Black Sheep beer to bathe her voice through a gleeful set of ramshackle country beauty, roadhouse blues and sometimes chaotic, chugging rock that began, against all expectations, with Catatonia's valedictory lament, Godspeed.

No woman since Janis Joplin sings with such abandon, eyes in ecstasy, mouth so wide, voice untamed and wild, tender yet burning.
To round off a rowdy Saturday, curry for 20 from JB Spice arrived, and Cerys was last spotted carrying a child-booster seat to the monster bus.

By Michael Gray, writer & critic, and author of the Bob Dylan Encyclopedia

"Sarah, Magdalena & I went to see Cerys Matthews & her band at the Band Room, Farndale, here in the foothills of the North Yorkshire Moors last Saturday night. (Cerys comes into The Bob Dylan Encyclopedia, because she helped Bucky Baxter build a studio in the woods... in a place almost as out-of-the-way as the Band Room.) Her website doesn't admit the existence of this gig at all, but in reality it was the opening night of her tour. How her big blue double-decker tour bus made it over the bridge at Low Mill I don't know.

This was the venue we wanted Dylan to come to, a year or two back ... [he] still should, since every "name" act that does play the Band Room (capacity 80-100) finds it the most charming, funkily intimate venue they've ever played, and in the most beautiful possible setting.

Cerys Matthews certainly seemed to enjoy herself, and she was terrific: full of life, openness, playful zest and integrity - and an authority that didn't posture or ever become pseudo-masculine - and her fine band achieved a nifty balance between engaging thought-out arrangements and bright improvisation, setting Ms Matthews free to play as little or as much as she felt like, moment by moment, and to sing out with exuberant confidence.

The support act was a young man whose entire repertoire was sung in Welsh, though he addressed the audience in English between songs. He sang sweetly, and played excellent acoustic guitar, but as men with cigars will be telling him, if he wants to get anywhere he'll have to swallow his nationalist pride and sing in the global language of English."

"I'm lying in my bunk on the bus in the "car park" (what we would call a parking lot in the states. again, what's funner? car park or parking lot. caravan park or camp ground. hmmm, I see a pattern here. let's try adding park to something and see if it becomes funner. hey kids wanna go to the library for the afternoon? no way! hey kids wanna go to the book park for the afternoon? yeah! of course we all do!)...
so anyweezle I'm in the very small car park of a very small venue in north western england. please please check out the website.

www.thebandroom.co.uk the place is absolutely cute and the surrounding country side is full of beauty and peace. this is one of those times you can write something like that and be completely not embarrased because it's just plain true. we're in farndale I think? I don't know but it's one of the most beautiful places I've ever been. rolling vallies peppered with cute old little stone houses. it took quite the manuevering to get the bus down here to this place.

our show:
it was sold out. (17.50 pounds a ticket!) great feel. we had a really relaxed set. to the point of deciding which song to play next on the fly which is something we've never done. my back was up against the wall... literally. the stage was tiny. ahh, but it wasn't even a thought because of how amazing this place and these people are. after the gig we set around back stage and got our stuff packed up. there was a girl in an amazing black shirts full of furious flames who had been on the front row and yelled out that she'd rather come see cerys than bob dylan, who ran into me outside and got me to take the poster for the concert she'd bought into the dressing room for cerys and all of us band to sign. first autograph of the tour...

anyways blah blah blah backstage sitting around. but then all the sudden we were told that the food was ready and went out into the performance space and there was a big table (two fold out tables put together) with a cool table cloth and a spread of food that made me wet my eyes! (that'd be a funny saying wouldn't it?) oh my gosh... indian food! they had bought it from a place down the road and prepared it in their kitchen and now were presenting it to us. the nahn (sp.?) was amazing. like real deal nahn out of the clay pot. two kinds of curry and rice. by the way, the lights were all down and there were a bunch of candles in the middle of the table. so the band and crew and the organizers all set down to a nice indian meal in some tiny hardly-can-be-called-a-town town somewhere in rural england. man the mixes of cultures in this place are amazin'.

I set next to a guy named mark on my right. mark, for a living, oh builds walls. yep, those picturesque lil' diddies that you see dividing inheritances all over UK country-sides, yep those kinds of walls. with tools, he held up his hands to illustrate the tools he used. wow, that's a man.

and across from me set tim. he was one of the main organizers. he's wise. or at least really smart. no, I'd say wise. after the meal me and our sound guy andy and tim got into a political discussion about how america and the rest of the world. won't get into all of it, but he had a real rational viewpoint. he just felt warm and down to earth..

Alun has been playing solo since February 2004, since then he has released 2 albums on the Rasal label , the first Aderyn Papur in August 2004 and the second Y Distawrwydd in August 2005. He's currently working on the third which will see light of day in January 2007 on the Aderyn Papur label. In between woooing the masses on Cunard line cruise ships he finds time to play guitar in Euros Childs's band and also moonlights for Gwyneth Glyn on bass, banjo and mandolin.

"Local boy making good. well travelled, well talented, well too good to be tied down. crackin music, gigs hard, respect. catch him if you can. A dedicated man."