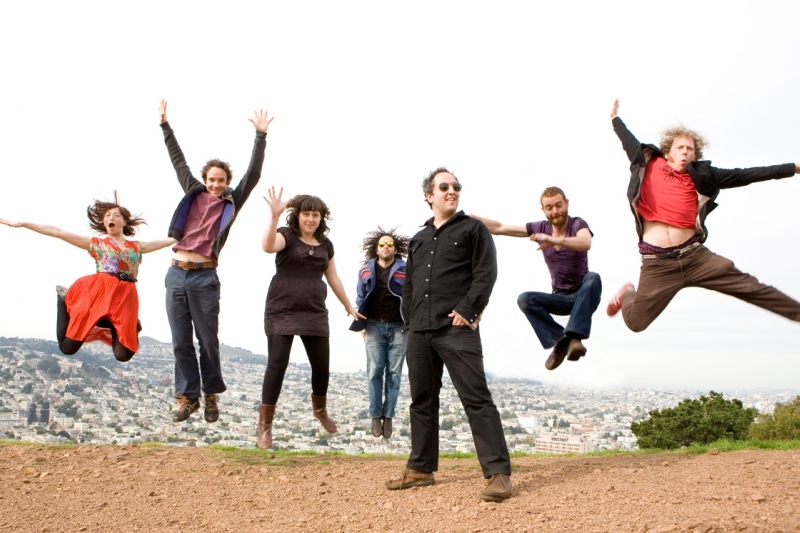 "I don't feel a need to distance myself from anything I like," Citay's leader Ezra Feinberg said in 2006, not long after the release of Citay, his extravagant self-titled debut of unbridled classic rock grandiosity for Important Records. "If anything I want to bring myself (and my bandmates, as well as my friends and family) closer to everything I like."

The interviewer had asked Feinberg about irony in his music - specifically, how he hoped the irony of Led Zeppelin references, sizzling electric leads, and a heroic, fantasy-rock instrumental dubbed "Vinter" might work amidst a landscape of cynics and smartasses. After one record, it might've been hard to say much of Feinberg's intentions. Yeah, those classic riffs ruled, and the layers of warm Jethro Tull and ELO textures that he and producer Tim Green stuffed into Grateful Dead-like shapes sounded fantastic. But what about that flute? And those keyboard layers and string-section sprees? He must be teasing at least a little bit, right?

If any doubt lingered after Little Kingdom, Citay's triumphant and enormous 2007 debut for Dead Oceans, then Dream Get Together - Feinberg's third and most expansive album as Citay - dispels it entirely. From the Fleetwood Mac grandeur of the ballad "Mirror Kisses to the five minutes of instrumental swagger of "Secret Breakfast", Dream Get Together gathers the totems and taboos of 1970s rock and, as the record's title suggests, treats them all like the guests of some imagined jam session. At times, it might seem a tad cornball or cute, but Citay make triumphant, affirming music that leaves no room for irony.

Dream Get Together's closer, a cover of the 1988 Galaxie 500 single "Tugboat", is the most concise and accessible example. A room-filling acoustic guitar, more brisk and bold than it is schmaltzy, takes the rhythm, and a radiating electric line washes atop, announcing the theme in advance of Feinberg's, for once, dominant vocals. "I don't want to stay at your party/ I don't want to talk with your friends/ I don't want to vote for your president," he sings in harmony with himself. If the original take followed those declarations with question marks or uncertain ellipses, Feinberg chases them with exclamation points. Like the Galaxie 500 take, Citay end with an extended guitar vamp. But Galaxie 500's dissonance and stuttered lines wound tightly in turmoil. Feinberg and Green whirl in delight, their foil guitars treating the exit more like a liftoff than a comedown. It just feels good.

That holds for much of Dream, too. The title track, for instance, is a total celebration - shakers, strums, and big drums opening the door for a sharp guitar line and Feinberg's summertime revelry. In one verse, he references Neil Diamond and Steely Dan and, more importantly, details the joy of his dreams - "two hands out the window, two hands shifting gears." Opener "Careful with That Hat" is a sidewinding epic veering between choral swells, a Motorik midsection, and a solo that sends San Francisco's past exploding into the air like sparks.

Through it all, Citay supply a surprising amount of editing and elegance to these jams. Just two break the seven-minute mark. When Garbus' oohs and aahs float through a thick keyboard-and-acoustic haze on "Mirror Kisses" - or even when the guitars lock in long, winding harmonies during "Fortunate Sun" - Citay remain controlled and careful. Songs are constructed so that each line plays a certain role, every note tells its tale. Maybe that's where it will lose some listeners, too: It's not tough and rough and wild around the edges like Green's old band could be, or a lot of heavy metal can be. And it's not open at the ends like jam-band music. But this is Feinberg's third album of eight tracks in about 40 minutes, all exploring the same excitable intersection of psychedelia and pop. By now, he doesn't seem to be the sort to back down from his musical decisions or not to pursue the lavish sounds he hears in his head. Good thing, too: If he did, these intense little trips would be a lot less fun. (Pitchfork)

Dream Get Together could well end up being a minor San Francisco classic. Like fellow SF residents Sun Kil Moon, the longer song is favoured, but the comparisons end there, pretty much. Citay play a kind of classic folk influenced rock, and while it's firmly in that breezy melodic west coast tradition, never really feels retro or anything less than fresh.

Standout tracks are the opener, memorably entitled 'Careful With That Hat', a brilliant folk-rock hybrid with some great guitar on it, electric and acoustic, and the closer, 'Tugboat' - which has the most reverbed vocals I've heard since 'Steam Engine' off My Morning Jacket's It Still Moves, and some ace lyrics: "I don't wanna stay at your party/ I don't wanna talk to your friends/ I don't wanna vote for your president/ I just wanna be your tugboat captain".

San Francisco's temperature is generally about four degrees lower than that of Los Angeles. You can hear the coolness in these tunes.

It's the sign of a strong identity that an album cuts through the weather and general grime of London to show you the perennial summer of San Francisco in the 1970s is only a song away.

Borne on a buoyant pulse of strummed acoustic guitars, with the shimmer of flanged electric guitars zig-zagging between them, most of the tracks on Californian combo's Citay's third LP feel like prog epics - even the ones that stay under seven minutes. Fortunately, for all the FX and synth-settings, the songwriting isn't obsessively authentic in its emulation of Pink Floyd, Popol Vuh, or ELO.

That's to say, there's a solid groove to most tracks, with no digressions to the Court of the Crimson King, or democratic opportunities for weaker members of the commune to sing. Just as twee-revivalists The Pains of Being Pure at Heart are more JAMC-like than Felt and The Field Mice, Citay present a fantasy version of prog for 2010.

In places, the seamless, flowing grooves are replaced with more rhythmic, danceable arrangements. The title-track has a passing resemblance to Belle & Sebastian's Boy with the Arab Strap. Then again, Secret Breakfast, at the midpoint of the album, uses fluting keyboard sounds, and the gentle pattering of tabla or bongos, to take us down to the edge of a very sleepy river. Hunter, alone, has a hint of space (evoking) rock in its massively reverberated distant instruments, and otherwise rare minor chords. The song's alternating guitar solos compete to be as imagistic as possible: you can imagine stoned audience members going "Hey! That one's a robot rapping!" before some old-school heavy metal hoves into view, like a landslide.

True, the propulsive opener, Careful With That Hat, acknowledges its debt to Pink Floyd, but it's Bardo Pond and Mercury Rev who spring to mind more often, which is why the closing cover of Tugboat by Galaxie 500 (pretty much spot-on) seems so appropriate - Citay aren't obsessed with a Golden Age that's in the past, but a Golden Age that keeps recurring. --Alex Tudor

And UNCUT said:
Citay's first self-titled album, from 2006, posited Ezra Feinberg's Bay Area collective as a fractionally heavier wing of the acid-folk movement, filled as it was with a kind of mellow, medieval-tinged rock that seemed indebted to the acoustic dalliances of Led Zeppelin and Black Sabbath.

There was also, though, a peculiar affection for chorus pedal-heavy solos that, in spite of their obvious similarities to Brian May, made Citay pretty interesting outriders of the whole scene. Now on their third album, Feinberg seems only more intent on amping up his vision. "Dream Get Together" signals its intents very vigorously with the opening track, a fluid seven-minute jam called "Careful With That Hat" that finds the band becoming ever more ornate, baroque and charged.

The detailing is very pretty, and the almost incidental snatch of song somewhere in the middle is reminiscent of Graham Nash, but it's the ravenous, buccaneering electric solo that dominates, that identifies Citay as such an enterprisingly odd, melodic group.

If there's an obvious analogue for the boggle-eyed rustic choogle of the title track, it's Hawkwind's "Hurry On Sundown", of all things. "Fortunate Son" (not the Creedence song) more or less repeats the same trick, albeit with a wrongfooting Fahey-ish intro, and a swift drum solo. And even when the acoustic guitars come to the fore, as on the windswept "Mirror Kisses" (quite Nash-like again), there's a tension created by a feeling of inevitability that, at any moment, an electric solo will come and burn a hole in the stately strumming. "Hunter", meanwhile, suggests vaguely the idea of early '70s Pink Floyd decamping to Bron Y Aur, with a pomp-synth solo that's as preposterous as it is extended.

The thing is, Citay get away with all these proggish affectations, the woody bombast, the eccentric references, because they manage to integrate them all so neatly into a warm, holistic, mildly-psychedelic sound.