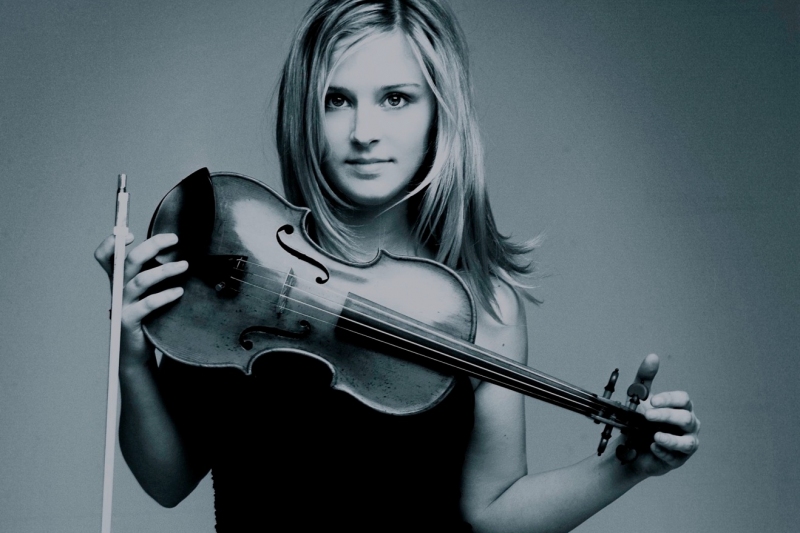 And now for something completely different...On 11/11/11 - Remembrance Day - we'll be rolling out the red carpet to welcome new Icelandic violin star Eva Thorarinsdottir who'll be bringing her 1845 Joseph Rocca violin to The Band Room to perform works by Bach, Ysaÿe and Vaughan Williams, among others. Born in Reykjavik in 1986, Eva has been playing the violin since she was three but made quantum leaps more recently after performing as a soloist at London's Wigmore Hall and Purcell Room and leading orchestras at the Royal Albert Hall and Queen Elizabeth Hall, at the Bridgewater Hall in Manchester, and on famous stages throughout Europe. This concert is a fund-raiser for Farndale's two village halls and is dedicated to the memory of our friend Harold Dobson, who looked after The Band Room for 40 years until his death in 2010...

Eva made her first giant leap when she went to study at the Yehudi Menuhin School of Music in Stoke d'Abernon, Surrey, under the tutelage of celebrated Polish violinist Maciej Rakowski. During her six years there she performed as a soloist at the Wigmore Hall and Purcell Room in London, and performed concertos with international orchestras throughout Europe. She continued her studies with Maciej Rakowski at the Royal Northern College of Music, where she won first prize in the RNCM Concerto Competition, performing Shostakovich's Violin Concerto No.1 with the RNCM Symphony Orchestra.

Alongside her solo performances, Eva takes a keen interest in chamber music and won first prize in numerous competitions with her Piano Trio. She has also led a number of orchestras, performing at the Royal Albert Hall, Queen Elizabeth Hall and Bridgewater Hall as well as the Menuhin Festival in Switzerland. Each summer she performs at Italy's prestigious Settimani musicali Di Stresa Festival where she is conducted by Gianandrea Noseda, Conductor Laureate of the BBC Philharmonic. In May 2010, Eva performed Mendelssohn's E minor Violin Concerto with the Manchester Camerata and shortly afterwards graduated from the Royal Northern College of Music with an International Artist Diploma in Solo Performance. She performs recitals throughout the UK and Europe, notably collaborating with the acclaimed Russian violinist Alina Ibragimova at this year's Manchester International Festival.