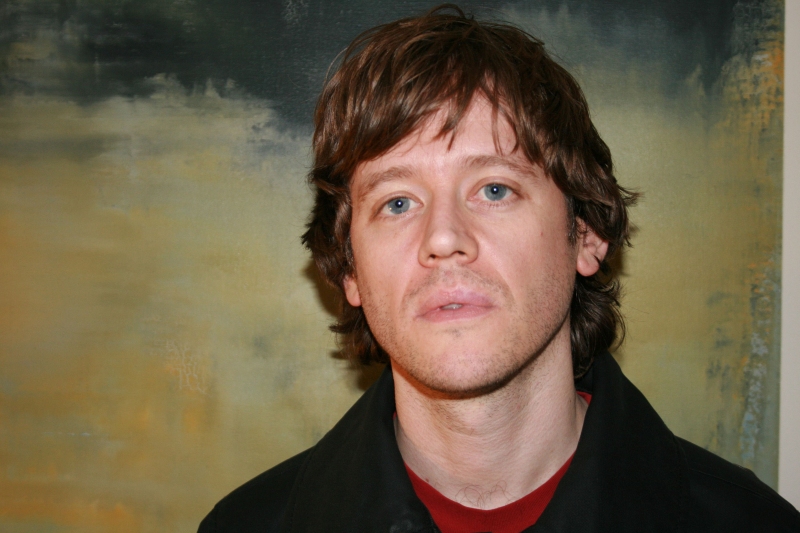 A year or more ago some friends saw Iain play - and he absolutely blew them away - not being there myself, and ever the sceptic, I have to admit that I did not exactly rush to get his album - but after one play I immediately knew I had to get him up to The Band Room. Since then he's supported his old friends Snow Patrol & the multi-platinum guitarist John Mayer - and we thought we'd lost the chance - but persistence pays off - it's taken all this time - but we got our man! - he is looking forward to the gig immensely - but not as much as we are! - and is being accompanied by his wife Miriam on vocals.
In his own words he sounds like "Feet on gravel, engines of small boats, the thing you do when the sun is in your eyes, playgrounds, collapsing bridges, small birds, lightning.." - but it is also rare to discover someone with such a talent for turning despair and bitterness into a thing of beauty.

In the words of the BBC America:

You quickly realize how much Snow Patrol lost when he decided to go his own way: he is, after all, responsible for one of the band's best and biggest ballads, "Run." He brings some of that song's earnestness to his own recordings - without the thundering melodrama. Gangly and small on-stage, his throaty, sensuous croon still commanded attention even on his quieter, more introspective pieces.

One man's view: "While the name Iain Archer probably isn't that familiar just yet, his work certainly is. The former guitarist in SNOW PATROL, he was the co-writer of Run, the tune that became nigh on ubitiqious a few months back - in fact it now seems to have replaced Coldplay's Trouble as stock music in a sensitive part of a TV drama.  Unlike other guitarists who try their luck at going solo however (Bernard Butler, John Squire anyone?), Archer's material can stand head and shoulders with his previous record. Summer Jets is a melancholic gem of a song - it may take a few plays to get under the skin, but once it's there it stays with a vengeance.  In a world full of sub-standard Coldplay imitators, Iain Archer shines like a beacon. A name to watch out for."

IAIN ARCHER grew up in the small Northern Irish fishing town of Bangor in the '70s, in a musical and religious household. It was an insular place that shaped him deeply. "Bangor's a bit of a world of its own," he recalls. "Even in Northern Ireland terms. There's a certain sort of separateness. People always spend so much time facing inward. And I think that's why when you're a teenager there you have a real sense of wanting to escape, to anywhere else. Anywhere outside of Northern Ireland is almost forbidden, especially in the tight religious community that I was brought up in. I'm talking about a very particular little segment of that society, of course, and it's not like I know the people on my doorstep in London either. But the sense of what's out there, nobody wanted to grapple with. It's tidy: we've got this thing neat and sewn up. So maybe that gave me a core - but a sledgehammer had to be taken to it at some point!"

In the early '90s, Archer and his brother Paul (now singer with The Ghears), made their escape, fetching up in Glasgow. After the restraints of his upbringing he felt flooded with "vitality" and "colour". There, he made his first albums, Playing Dead (1995) and Crazy Bird (1996), for Scottish label Sticky. They were well-liked by Mojo and Radio 1, and Archer's acoustic shows were so strong he was invited to support JOHN MARTYN and NILS LOFGREN. But the instinct to keep moving still fuelled him. Dissatisfied at playing acoustic music he saw as "decorative", terrified he'd turn into another MOR singer-songwriting strummer, Archer quit performing.  He never admitted to himself he was quitting music forever. He still wrote. But, uprooting again, to London, he spent four years working at a hostel for homeless young people. It broke open some of the insularity he'd grown up with, feeding him experiences he'd use later. "You pass people in the street, and they live radically different lives," he says. "That was the time when I learned about people from all sorts of different backgrounds, with all sorts of wonderful, terrible experiences. The job made you consistently confront hard, cold truths."  In the midst of this, acquaintances from Glasgow came calling, and in the freeform spirit of the city's music community, Archer joined the Reindeer Section, and SNOW PATROL. These collaborations saved his musical life. "They influenced me massively," he admits. "I wouldn't be doing my music now without them. It gave me huge confidence. I ended up in Snow Patrol for a year-and-a-half. I found out the worth of not being solitary, and it was great, great craic, clanging the guitar night after night, in such a spirited, open band."  This change in fortune peaked when "Run", a song Archer co-wrote on Snow Patrol's surprise smash Final Straw (2003), became a big hit itself, and won that year's Ivor Novello Album Award, voted for by his songwriting peers. "I welcomed the award," he says. "And it was really exciting to have a hit, a completely revolutionary thing that a lot of people wanna hear a song you've been involved in. But then it's funny, because you're measured against it. But it's great!" he laughs. "It's lovely."

By now, Archer was thinking about a new solo album. But Flood the Tanks (2005) would hardly capitalise on his associations with the Patrol. He was still desperately trying to avoid being a run of the mill singer-songwriter, or some comforting sub-Coldplay balladeer. "Even just the act of singing became about something different than just opening your mouth and trying to make a nice sound. I really tried not to sing, and s ee what that would do," he recalls of the album's driven making. " That whole record was made on my knees, you know - in a physical sense. Singing on the floor, in the corner of a room, sometimes with a little four-track or something." Such stringent, spartan conditions had an aim. "It was really important not to emote," he says. "What I couldn't tolerate anymore was being plaintive. There'd been so much of that out, I couldn't find a truth in it. There's a poise in that as a style that I just didn't want. I wanted the whole thing to be broken. That was the most important thing about that album, that it had a sense of falling apart, and fragility. There is always that element of self-destruction when I make music, where I try and disintegrate the thing I just made. That path of destruction is to get down to something pure. You start talking about this, and it all starts sounding so self-righteous," he laughs, catching himself. "Ridiculous, and futile. But you still try."  Flood the Tanks' themes were just as sharply drawn. It was about loss. "I had lost a loved one," Archer says. "But I didn't want to write about it like I'm special. It was more like, this is what we've all got. This is what we're left with. I was also looking at my own solitariness in that situation. Because there was also a sense on Flood the Tanks of trying to get to internal things, of watching how your own head works.   "Afterwards, I felt a sense of space. Like I'd cleared a circle in which to operate. And now I had to actually make something decent, in the debris."  Flood the Tanks was released to renewed acclaim. But its lengthy, agonised, inward-turning gestation was not something Archer cared to repeat. Going out and playing solo again, he found he had to reach out to crowds and find ways to connect, with these insular songs "that had been recorded on my knees". "It was when I had to learn to articulate again, on stage, that the ideas for this new album started to form," he explains. "I was also listening to American albums where there was a liberation, a certain lack of control in how they were being put across, like the last Shins album, and Bright Eyes, and the Flaming Lips, who just mess with you. This record let me be playful again. I wasn't holding really tight to every last drop of decision, but just let things happen, the way Neil Young does. Flood the Tanks is all restraint and introspection. Magnetic North gets away from that. It isn't just about my head. It has narratives, and real, physical situations.

In April Jacob came and played a house concert for Tony in York - it sold out within hours - and was a simply magical evening. On that same short tour Jacob also met up with his old friend Iain Archer at another house concert in Cambridge. We hoped that he would be able to make it back across from America for this gig, and he has....

"There are singer-songwriters who make a pleasant enough noise, and there is Jacob Golden, whose 2002 album Hallelujah World is still a quite hauntingly great listen - all exquisite melodies, perfect voice and gentle warmth. It is criminally ignored. Revenge Songs sees him back on disc after a year's recording, and still mining a great seam of soaring melody, like a gentler, more earthbound Ben Christophers, or even an on-form Jeff Buckley.

There are songs to fall in love with, such as Revenge Song, and songs about love that will make you ache, such as Love You. Here, Golden's lyrics have improved even over Hallelujah World's stories - the lyrics ring more true, and more insightfully, than The Streets (Hold Your Hair Back, On A Saturday). Golden's philosophy is succinctly bound up in the words of Mark Hollis: "Before you play two notes learn how to play one note - and don't play one note unless you've got a reason to play it." Revenge Songs is all the reason imaginable."

"a bonafide gem from top to bottom: terrific melodies, wonderful performances, great production!"
[US review of her debut album]

JOSEFINA SANNER - has toured extensively in Sweden, Denmark & Germany but this is a UK debut for an amazing new Swedish singer & songwriter.
Inspired by peers like Joni Mitchell, Kathryn Williams, Ron Sexsmith, Rosie Thomas and Kathleen Edwards, her lyrics are like bittersweet postcards from a close, but still, faraway land.