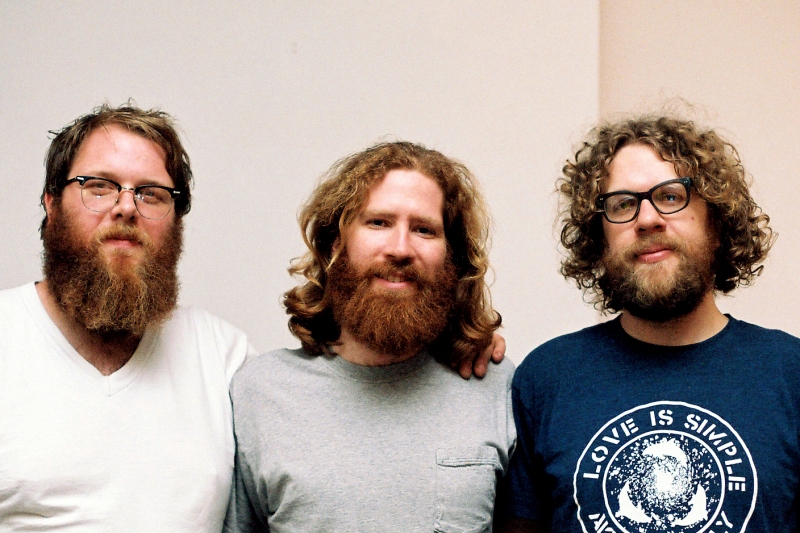 Megafaun came, saw and conquered here in December and are the perfect band to play again the Sunday of the August Bank Holiday weekend - the night before the 103rd Farndale Show. Who knows, they might even bring their horses...More radical than former band mate BON IVER, more inventive (and much more impressively bearded) than FLEET FOXES, Megafaun are a supercharged new trio from Durham, North Carolina, who've somehow managed to fuse alt.country, folk and Steve Reich-like experimentation with psychedelic bluegrass and gorgeous three-part harmonies reminiscent of CSNY, THE BAND, GRAM PARSONS and the FLYING BURRITO BROTHERS. "Their roots are familiar; the bloom is uniquely theirs," said ROLLING STONE...

What the Press have been saying about Megafaun's second album Gather, Form & Fly:

"Megafaun's roots are familiar; the bloom is uniquely theirs"  (Rolling Stone 9 Aug 2009)

"Megafaun fits squarely in the bearded Caucasian folkie camp, but the ethereal Gather, Form & Fly is far too extraterrestrial-sounding to be bound to this planet, much less this country. Evoking a warmly inviting yet mysteriously alien countryside terrain reminiscent of those gorgeously golden wheat fields from Terrence Malick's Days Of Heaven, Gather, Form & Fly has a psychedelic mind & a Pentecostal heart, applying raggedly strummed banjos and woozy acoustic guitars to harmonies that swell heavenward like ghostly dust clouds."  (The Onion 4 Aug 2009)

"Megafaun has no interest in repackaging bygone sounds in tidy boxes. The trio displays supreme faithfulness to the spirit of a century's worth of iconoclastic folkies by boldly choosing to forge their own road, restoring idiosyncrasy, weirdness and vision to Americana."  (N&O 26 Jul 2009)

"Averse to predictability and sentimentality, the band is restless with established forms, yet instead of subverting blues and folk traditions, they upend them. Their ends are deconstructive, not destructive."  (Pitchfork Media 24 Jul 2009)

"Healthy beards all around, the boys take on a CSNY crash course up the mountain, but add in a rhythmic thump and determination that strikes me as beautiful. Their mix of seriousness and unabashed enjoyment of being on stage is infectious."  (BrightestYoungThings 8 JUL 2009)

"Megafaun (doesn't) just catalog American musical languages, they breed them. Who else could pull off a song that sounds like the buxom man-folk of Crosby, Stills and Nash, but moves with the finesse of Reichian process music-- a song, no less, about the desert immolation of Gram Parsons' corpse?" (Review of Kaufman's Ballad from Pitchfork Media 22 JUN 2009)

"The blowzy barbershop harmonies that open "Find Your Mark" evoke Fleet Foxes with terrible hangovers, although this album's release on a sub-label of the experimental music imprint Table of the Elements should give you a clue that this is more than rustic reconstruction." (Review of Bury the Square from Pitchfork Media 9 SEP 2008)

Megafaun's recently-released second album, Gather, Form & Fly, is a monument to a band that fans have experienced on stages, under trees, in galleries, on ?oors, in headphones, and through radios-with-the-windows-down over the past three years. All the hints they’ve given us --- from songs Stereogum described as "mournful, slow-blooming banjo-and-white-noise-laced epics" to tours with The Rosebuds, Arnold Dreyblatt, and Akron/Family --- have culminated in a record that is an ode to death, love, musical history (from blues to musique-concrete), community, tradition, and experimentation. In all, it's an ode to the listener.

Based in Durham, North Carolina, Megafaun was built by brothers Brad and Phil Cook and fellow Eau Claire, Wisconsin, native Joe Westerlund. The trio, plus longtime friend Justin Vernon (a.k.a. Bon Iver), made the cross country move together from WI to NC as the band DeYarmond Edison, ultimately splitting in 2006. Megafaun was born from those ashes and proceeded to record the remarkable album Bury the Square in 2007. They found a home on the road, collaborating with friends (they also joined Akron/Family and Dreyblatt as backing band) and developing an American musical language that is exquisitely translated by this year's Gather, Form & Fly.

Brad, Phil, and Joe have been playing in bands together since 1997, after meeting at jazz camp in Wisconsin as teenagers. Life's been an additive --- and adaptive --- process since then, bound by a rare and long-lasting commitment to a friendship that has always been set to music. With the end of DeYarmond Edison, a paradigm-shift was imminent. "Brad and I left our primary instruments behind and picked up secondary ones. We booked a seven day tour with out having written any songs," said Phil, revealing the seeds of the improvisational spirit that both Megafaun and their fans now cherish and exalt. "We've become song writers collectively and individually through the birth of this band," added Joe, "and Gather, Form & Fly marks a huge growth and change in our thinking about time and song form."

Megafaun's past three years ripple with the power of varied experience usually reserved for a lengthy decade: 250 shows over the past two years, supporting tours doing double-duty as backing band/collaborator with nearly every notable and diverse tourmate, and musical exploration spanning albums, generations of musical history, and fathoms of personal exploration. That self-survey daringly brings itself to the stage: "We thrive on situations that allow us to expose our nuances, our imperfections, and our spontaneity. We are not afraid of the imperfect set, but are afraid to limit ourselves to the non-spontaneous nature of recitation," said Joe. That same spirit informed the album, which was self-recorded in three bedrooms, a kitchen, a yoga studio, a living room, a basement, and in a forbidden university piano studio that they had to break into to find an in-tune piano. In act of further embracing the new, Megafaun brought in Chris Stamey (the dBs, Holsapple-Stamey, et al) to help mix and guide Gather, Form & Fly, adding another dimension to the superb result.

"We have an all-inclusive, listener-sensitive, tradition-hungry, innovative and genuine practice of improvisation. The stylistic spaces we inhabit during these improvisations can span influences from dissonant 50s electronic music, musique concrete, and free jazz; to a melodic consonance associated with traditional American folk and popular song forms, as well as some traditional influences from other parts of the world (African, Cuban, South American Rhythms). Really, we feel all these musical styles (academicly-based or not), when incorporated in the improvisational life of this band, become part of our own folk tradition." - Joe Westerlund of Megafaun

Gather, Form & Fly rings out in its honesty to its makers and, thus, to its listeners --- both on wax and on stage. Phil, Brad, and Joe move with awareness of their every move, acknowledging in near-unison that this album share's Bury the Square's broad stylistic and emotional palettes --- group percussion, cacophony, drone, and folky narration will not disappoint --- but also reveals sounds and words that have been, somewhat silently, with them all along. There are the moments, present in every song, that will turn heads toward speakers, turn eyes toward the sky, and turn all notions of music on their sides, if just for one shimmering and genuine moment. And then, almost anywhere this Summer, you can go see them live --- and hear it all again, for the first time.

"I love that when we talk to each other, names like David Tudor, Anthony Braxton, Avett Bros. and The Band are mentioned in the same breath. We are attracted to people who are always searching and always honest. That's the core aesthetic we are drawn to." - Brad Cook of Megafaun