Salt and JT and The Clouds 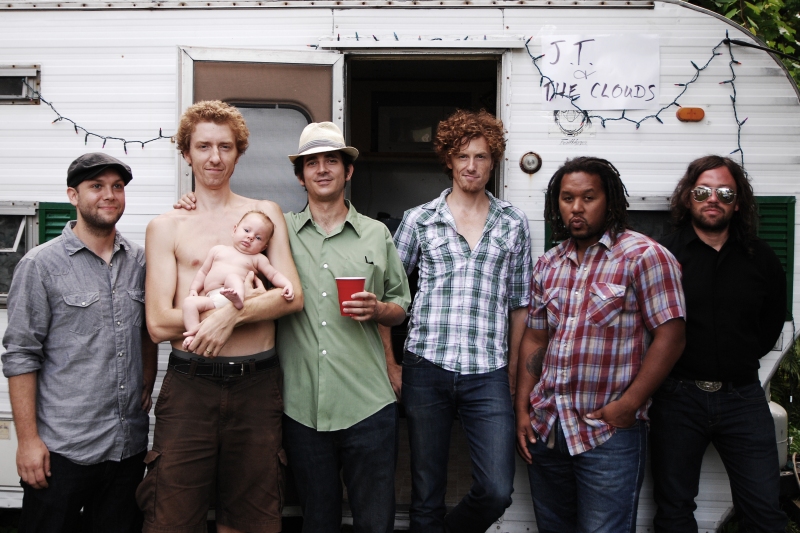 Classic Americana / roots, jazz and soulful country grooves are all bases touched by the songs and music of Vancouver, Canada-based Po' Girl stars Russell & Teixera who now step out on their own as SALT. 'Two voices, four hands, ten instruments, and ears wide open...' their music has been compared with NATALIE MERCHANT, NORAH JONES and TRACY CHAPMAN. US rock critic Don McLeese said of the new Po'Girl album Home To You: "The jaunty ragtime of "Go On and Pass Me By," the delicate latticework of harmonies on "Home to You," the jazzy reverie of "So Lazy," and the country waltz of "Texas" attest to their refusal to be bound by categorical restriction."

Long time fans of the BGTs we were new to acoustic alt.country outfit Po' Girl when we went to see them at Selby Town Hall in March - and went home wondering how we could possibly have been so slow on the uptake...Old time roots, jazz and soulful country grooves are all bases touched by the songs and music of this band, made up of Be Good Tanya Trish Klein, Allison Russell, Awna Teixeira and Diona Davies, their contrasting vocals and brilliant instrumentation creating a mesmerising fusion of textures, moods and emotions.

Now Vancouver, Canada-based Allison and Awna step out on their own as SALT. 'Two voices, four hands, ten instruments, and ears wide open...' their music has been compared with NATALIE MERCHANT, NORAH JONES and TRACY CHAPMAN.

Still in their twenties Russell (founding member of PO' GIRL) and Teixeira (founding member of BARLEY WIK) are already veterans of the international roots music community. They met just after the turn of the millennium but it wasn't until the winter of 2004 that they were in the same room long enough to co-write their first song. Recognising in each other a fellow lifer and runaway to boot, Alli and Awna felt it was only fitting to join forces and make their self-taught melodic mayhem together.

Between them they play banjo, guitar, clarinet, accordion, gutbucket and electric bass, pennywhistle, bodhran, harmonica, washboard and kazoo. They play pretty much anything they can get their hands on, and everthing they touch sounds distinctively like Salt.

They've recently recorded their debut album and will be touring this internationally when they arrive at the Band Room in September. But they will also be playing Po' Girls classics too. Frankly we wouldn't let them leave without singing 'Til It's Gone...the instant classic from Po' Girl's critically-acclaimed new album Home To You.

With its Depression-era name and penchant for framing arrangements with banjo, clarinet, and fiddle, this Canadian quintet (including Trish Klein of the Be Good Tanyas) specializes in contemporary original material that sounds like public-domain traditional. Some of the anachronistic affections sound like a minstrel show, such as the vocal phrasing on the spiritual "'Til It's Gone," but the jaunty ragtime of "Go On and Pass Me By," the delicate latticework of harmonies on "Home to You," the jazzy reverie of "So Lazy," and the country waltz of "Texas" attest to the music's refusal to be bound by categorical restriction. And there's nothing nostalgic about the social conscience displayed in "To the Angry Evangelist," capped by a furious fiddle coda.
--Don McLeese

A sold-out crowd waits in semi-darkness. Outside, a van pulls up and five beautiful rag-tag misfits carrying all manner of instruments saunter through the back door. They head unapologetically past the frantic promoter and onto the stage.

Po' Girl starts the show. In typical Po' Girl fashion. On time…and at the last minute.

Po' Girl is made up of Allie, Awna, Trish, John and Diona. Their strength is in the power of gentle. This is very compelling...

Two years later, the duo found they had become, among other things, a five piece band of multi-instrumentalists. Signed to Nettwerk Records (their first album Vagabond Lullabies came out in 2004), these folk festival darlings soon were headlining venues of enviable size and sharing stages with the likes of David Byrne, Richie Havens, Ani DiFranco, Michael Franti, Utah Philips and Penny Lang.

Po’ Girl also began to notice how they were constantly on tour: Canada, the States, Europe, Australia, England, Ireland, Scotland, Spain, Africa...
Home to You, Po’ Girl’s new record has captured the breezy, summer night feeling that their live show evokes. And thematically, it seems that the last two years of solid touring have had an effect. Most of the new material is about travel, longing and the notion of 'home'. All self-confessed former 'teen-age runaways', it appears that Po’ Girl has found their new 'home' - together, driving down a winding road in Shaggy the Love Van. The songs have become gorgeous documentations of this feeling.

Clearly a collective effort, Home to You features songs written and delivered by each band member. Po’ Girl boasts no official 'front man'. Everyone gets a turn. And as the band expands in size, (Diona joined in '03, Awna in '05 and studio engineer John became the official tour drummer in '04) it does the same in proficiency. The result is that many more musical styles weave their way into this fellowship known as Po’ Girl.

For example, Alli's 'To the Angry Evangelist' sounds like a furious Billie Holiday fronting a killer klezmer combo. Awna's song, 'Drive All Night' has such an infectiously catchy pop feel to it that there ought to be a vaccine. Trish, who, need we mention is also in the Be Good Tanyas, lends her voice to the album's opener 'Skies of Grey'.

Home to You will no doubt be placed in the Roots section at record stores, especially since the song arrangements feature accordion, washtub bass, clarinet, banjo and violin. But with the addition of masterful human beat box freestyler C.R. Avery on 'Nine Hours to Go', and Chris Brown (of Chris and Kate) sitting in on organ, the Pop or Soul sections could certainly serve as a good home as well.

Po' Girl finds devout fans wherever they go. And the word is spreading. Anyone who is attracted to the age-old universal story of a ‘rag-tag down-on-their-luck group of misfits who bands together to take over the world’ will surely find a home here. And who doesn't like that story?